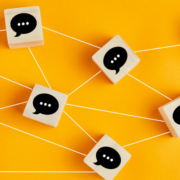 NOTE: This post originally appeared as an episode on my podcast, Andrew Petty is Dying. You can listen now with the media player below, or just read on…

When is the last time a conversation didn’t go well between you and someone especially important to you?

Or, when was the last time you avoided a conversation that you knew you needed to have–only to have it turn into a bigger and more intense conversation later when the proverbial shit hit the fan?

If you’re anything like me and most of the other humans inhabiting Planet Earth, you don’t have to go back very far in your mental files to recall that conversation that went badly or the one you avoided that came back around to haunt you.

Some of the deepest regrets people experience in their last days or after losing someone they love come from wishing they’d never said that one thing or had been brave enough to say that other thing.

We ARE going to die. But we’re not dead yet.

Let’s take a look at how we can improve our conversations with those we love and cherish most while we still have the chance.

In my line of work, the relationship between my client and someone else important to them–like a spouse, partner, parent, or child–comes up frequently as a matter of concern, hurt, stress, or disappointment. And more often than not, in those situations the quality of the capitol-C Conversation in their relationship is suffering.

In fact, our most important relationships are like one big capitol-C Conversation made up of thousands and thousands of smaller conversations over the years.

That capitol-C Conversation is of course made up of the words we do say. But it’s also made up of the words we decide NOT to say and the little conversations we avoid because they’re too inconvenient or uncomfortable in the moment. What we say matters, and what we don’t say matters, too. Sometimes, there are way too many words, and sometimes there are way too few.

Pause for a moment.

Look back right now on the capitol-C Conversation you’ve had over the years with someone close to you. What’s it been like, overall?

Full of honesty–sometimes to the point of doing harm? Contentious? Riddled with suspicion and one-ups-manship? Maybe it’s been playful and adventurous but sometimes lacked the gravity that it needed in order to navigate challenging seasons. Maybe one person in the relationship always “wins” and the other one always “loses.” Maybe you can honestly say that even though there have been lapses, overall the conversation has been maturing through the years.

Whatever it’s been like, though, I think we can all acknowledge that there is room for growth somewhere. We’re not in pursuit of perfection. But we are in pursuit of even more substance and meaning and joy and satisfaction in the conversations that matter most, in the relationships that matter most. So that when either they or we breathe our last, we can say with conviction that we gave it everything we had.

Barriers to Improving the Conversation

Let’s look first at common barriers to improving the Conversation in the relationships that matter most to us. Then, we’ll explore a few ways to begin improving those conversations right away.

Alright, here are two of the most common barriers to improving the Conversation that I’ve observed:

But first, I’m really excited to share something with you that has impacted me in a big way because I think it can impact you, too. And that “something” is a new podcast that MY coach, Amy K. Musson, has just released, called The Growth Moment. Amy is a spectacular coach with a wealth of gifting and experience, and my partnership with her has been transformational.

The Growth Moment is a new way for more of us to benefit from Amy’s gifts and experience because her show literally lets us sit in on coaching conversations that she records with volunteer participants.

Amy adds context and commentary to help us understand what’s happening in the coaching conversation and apply what we’re hearing to our own lives.

Recently, I tuned in to The Growth Moment for the first time, and for some serendipitous reason I picked episode 3, Forget the Rules! Do it Your Way, featuring a soon-to-be-college grad named Benen. In just 30 minutes, Amy’s coaching helped Benen become more willing to trust himself and create the first steps in his post-college life.

As I listened, I gradually became aware of a deep sadness within myself. And a few minutes later, I was completely surprised to find myself weeping as I shared with my wife what I’d become aware of in the course of listening to the episode.

Now, I’m not a very emotional guy–not outwardly, at least. And I’ve wept like this maybe twice in the past 15 or so years. So this was NOT normal.

In fact, I had connected with a deep source of grief in my own life that I wasn’t even aware existed or needed to be addressed. This episode brought the grief to light and allowed me to begin processing it. Wow. I’m SO thankful for this new awareness, because where there’s unresolved grief, there’s stuckness that’s getting in the way of becoming the person I’m made to be and living the life I’m made to live.

Now obviously, as they say on commercials for medications and diet plans, “results may vary.” You might not connect with grief like I did. But I’m confident that The Growth Moment will impact you in some valuable way because in a very real sense, other people’s stories are also OUR stories. And Amy is a skilled guide helping her guests and we as the listener have fresh, actionable insights that lead to transformation.

HOW to Improve the Conversation

Alright, so we’ve touched on two of the most common barriers to improving the capital-C Conversation with the most important people in our lives–our own stuff and the power of the Status Quo.

Now, let’s turn our attention to how to improve the Conversation–things we can do starting today.

This won’t be a comprehensive list, but I think the following things are high bang-for-buck and can get us all a lot further down the road.

Experiment with what works for you.

But whatever you do, don’t put off having the little conversation now before you’re forced to have the big, hairy conversation later.

Creating a capital-C Conversation with those closest to us that we’ll be proud of in hindsight is the ongoing work of a lifetime. This work compounds over time, so the investment we make in it today matters.

We first discussed two of the most common barriers to improving the Conversation, namely, our own stuff and the Status Quo. Then, we turned our attention to how to improve the Conversation–things we can do starting today. First, we take responsibility for our own stuff that’s getting in the way of a better conversation. Next, we motivate ourselves so we can shrug off the smothering influence of the status quo and create a new way forward. Then, we resolve to have the little conversation now.

New conversations bring new results. Sometimes, those new results are immediate and amazing. But they’re not always super enjoyable, especially at the beginning, as the other person adjusts to the new conversation, too. That’s ok. Be patient, and extend grace and the benefit of the doubt to yourself and the other person. And sometimes, it’s useful to have a professional help the two of you learn how to have the conversation more productively. That’s a smart move if you’re not finding a good way forward on your own, despite your best efforts.

The goal, BTW, is not to manipulate or change the other person. The goal is to do our part to create a higher-quality, healthier, more honest, and more enjoyable capital-C Conversation overall. That Conversation is made of thousands of other little conversations over the years. And you can begin to improve it today.

So resolve today to give a mighty heave and shrug off the smothering influence of the status quo, choose courage in the face of fear, doubts, and uncertainty, and resolve to do just one thing differently today. What will that one thing be for you?

Helping my clients have better conversations with the most important people in their lives is a big part of what I do. I can help you do that. Connect with me on Facebook, Instagram and LinkedIn, visit my website, or email me.

If You Liked This, I Think These Will be Helpful, Too

Remember, you ARE going to die. But you’re not dead yet. So get after it!

The Cockpit is Yours: From Passenger to Pilot

Reimagining Productivity: A Path to Greater Freedom and Fulfillment
Scroll to top