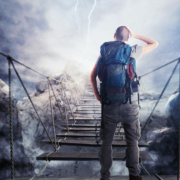 This is Part 3 of a four-part series. All four parts were originally delivered as one talk at HYPE in Steamboat Springs and Winter Park, CO, on March 6 and 7, 2019. HYPE is an annual event, TED-talk-style, that “brings inspirational thought leaders” to the area. (I hope I lived up to the “inspirational” billing!) My talk was entitled The Way Forward: Rolling Stones and Sailboats–for reasons that will become clear if you read all four parts in the series.

It was early in the morning one day five years ago, and my wife and two boys were still asleep. I, however, was wide awake…lying prostrate on the living room floor. (Not to be confused with “prostate”–which is what I actually said during the live talk from which this article was adapted. At 45, I guess “prostate” is on the brain.) This was not a relaxed “prostrate,” a slow, stretchy, meditative, welcoming-of-a-new-day kind of prostrate. This was a “holy crap, I’m scared out of my mind, all I can do is lay here” kind of prostrate. Super fun.

Over the past few years, it had become unavoidably clear that I needed a change professionally and we needed a change as a family, too. To determine what kind of change, we had worked a long, insightful, and highly-structured process with a coach–my first experience with a coaching partnership. We’d weighed pros and cons, clearly envisioned a better, more desirable, more satisfying life; taken a weekend retreat as a couple and a week-long retreat with my coach and his wife; made “low-cost probes” into various options; gained useful insight through assessments, and gotten counsel from family and friends. We’d invested a lot of time, energy, blood, sweat, and tears into the process, and eventually it had yielded the clarity we sought about the kind of changes we wanted to make. And yet here I was prostrate on the living room floor, scared to death to pull the trigger on a decision. Evidently, just knowing what kind of changes we wanted to make wasn’t enough.

Then, something popped to mind that my wife and I were in the habit of telling our boys: “If you’re scared, it’s a good chance to practice being brave.” We understood that courage isn’t the absence of fear. Courage is choosing to act in spite of fear, and it’s something that we can cultivate with practice. We understood this, but here I was face-to-face with what it really felt like, and I was absolutely terrified.

In that moment, I knew that the only work left undone was to walk my own talk. No amount of preparation, insight, diligence–as useful as those things are–would ever take the place of that conscious, deliberate choice to be brave. It was the final thing standing between me and the future that I wanted, the one thing that would empower me to become a creator of my destiny instead of remaining a passive dreamer.

And in that moment, I did choose to be brave. I didn’t have to, of course. We always have a choice. We can advance, or we can retreat. Don’t be deceived, though: There’s no such thing as staying where we are. Perhaps the realization that I would be a hypocrite of the highest order if I didn’t do what I so often exhorted my boys to do played into it. Certainly the pain of staying where I was had become intolerable.

No sooner had I made that choice than a new and more welcome presence also appeared alongside fear: Resolve. I was still aware of the fear; the many unknowns about how things would actually play out didn’t magically go away. But my choice to be brave made room for Resolve as a counterbalancing force to fear. The mental and emotional change within me was instantaneous and exhilarating. When my wife entered the room a few minutes later, the first words out of my mouth were, “Let’s go.”

(To be clear, this was a joint decision between me and my wife. Characteristically, she had mastered her own fear a few months earlier and was awaiting my arrival at the same point. She’s awesome.)

The road since then has been filled with ups and downs, highs and lows, steps forward and steps backward. Overall, though, the trajectory has been forward and upward. I can say with 100% honesty that we have never–not for one single nano-second–regretted our decision. Will Smith has said, “The best things in life are on the other side of fear.” I totally agree.

If you’re scared, practice being brave.

For Life & Leadership: The Prison of Plenty

For Life & Leadership: If You’re Uncomfortable, Good; Get Used to...
Scroll to top